James Archer (from his friend Ralph Carney) hipped me to this on Facebook. Don’t read the description until you watch the video! Elements of Bonzo Dog Doo-Dah Band here as well, although I’m sure these Czech guys never heard of them.

Jožin z bažin (originally 1978) is a song by Czech musician and comedian Ivan Mládek, and is one of his best known songs. He even called it the “National Anthem” of his Countryshows. In January 2008, the song became popular in Poland and Hungary, winning several radio hitlists. It is also popular in Austria and Russia, sporting a cult following in blogs and several versions of translations. The song is a surreal tale of a mysterious man-eating (especially those coming from Prague) monster (Jožin z bažin, Joe from the swamps) living in the swamps. He could be defeated only with the use of a cropduster. A Polish cabaret called Kabaret pod Wyrwigroszem (‘Cabaret under a torn out grosz’) created a parody of “Jožin z bažin,” entitled “Donald marzy” (‘Donald dreams’), about the Polish prime minister, Donald Tusk. The Ivan Mládek Banjo Band has created Polish version of “Jožin z bažin.”

My favorite comment from youtube: “When I was a kid I wondered what life was like on the other side of the Iron Curtain. Now I know.”

Still trying to figure out how to activate my FTP again to post more audio, but here is a link to a 1959 appearance by singer Linda Laurie on To Tell The Truth. Laurie recorded some very strange music, including my personal favorites “Ambrose Pt. 5” and “Jose, He Say,” both of which I own on vinyl 45s. Check out her scary “Ambrose” voice at 6:10! Kind of makes you wonder about “possessed” voices, doesn’t it?

This has been getting quite the number of hits on youtube lately.

It’s GODHEAD, I tell ya!

In the mid 1980s, I read an article in an amazing book entitled The Catalog of Cool. Amongst the entries on beatniks and 1950s cars was an article, “Wrestling From Peru!” which described a program that was aired in Los Angeles on a Hispanic UHF TV station in the 1970s. It sounded like the Mexican lucha libre stuff, but ratcheted up to 11 or 12.

Years later my friend Rod, who grew up in Chile, told me that he and his brothers had gone crazy over this program when he was a kid. Turns out it originated from Argentina, and it was called Titanes En El Ring. He remembered the costumes and characters, such as “El Astronauta,” “Mercenario Joe,” “El Hippie Hair” and the most feared wrestler of all, “La Momia.”

La Momia (the Mummy) was so frightening that many of his opponents would faint or run away rather than face his occult powers. Even the announcers screamed “Oh no! La Momia!!” as he made his deathly entrance. One episode featured not one, but TWO opponents who left the ring and tore through the TV studio meeting with a succession of locked doors in an attempt to escape La Momia’s wrath. They finally entered one room and supposed safety only to have the crap beaten out of them by a horde of partying hippies led by another wrestler called “Hippie Joe.”

Each wrestler had his own theme song, which played over his march from the backstage area to the ring. This of course led to a series of record albums, one of which I found on ebay a few years ago.

The first series of Titanes En El Ring ran from 1962 to 1967. Producer Martín Karadagián also starred as one of the wrestlers. In a later incarnation of the program, he even went up against La dreaded Momia:

Some of the kids in that clip look like they’re going to pee their pants.

A list of the wrestlers (in Spanish) can be found at the Titanes En El Ring website. My current favorite is “El Hacker,” with a photo of some skinny guy in a baseball cap carrying an ancient laptop. What did he do? Hack into the studio server to make himself champion? I doubt he even made it into the ring. 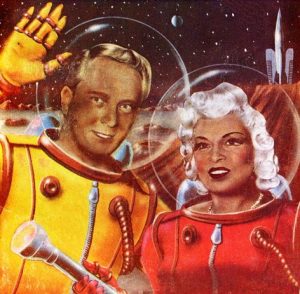 This is one of those things that you just can’t believe.

In her frightening dotage, Mae West became friends with pop psychic and Ed Wood acting staple Jeron Criswell King. West would invite Criswell up to her apartment in the penthouse at the Ravenswood on Vine Street for homecooked dinners and each year would “sell” Criswell a year-old Cadillac for $1.

In return, Criswell predicted that West would be elected President of the United States and they would both take a trip to the moon. In the perfect parallel universe from which we are forever barred, this of course came true.

As a tribute to her friend, West recorded a song entitled, predictably enough, Criswell Predicts. I believe that this has been posted online before, but you can’t get enough of a good thing.

Filed under Camp, Huh? What?