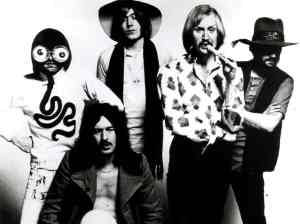 The Bonzo Dog Doo-Dah Band. That’s Spear on the left.

Most biographies of the Bonzo Dog Doo-Dah Band seem to champion the two most well-known alumni of this groundbreaking British ensemble (you can’t really call them a rock group) of the 1960s. Neil Innes went on to fame and fortune for his work with Monty Python and for his role in the Rutles mockumentary and records. Vivian Stanshall produced a few notable albums post-Bonzos, and since he was the lead vocalist and a prolific songwriter, he grabbed much of the spotlight when the band was in its heyday. The Bonzos appeared in the Beatles’ Yellow Submarine Magical Mystery Tour film performing their song “Death Cab For Cutie,” which is where most people first heard of them.

Roger Ruskin Spear is all but forgotten, even by many of those who count themselves fans of the Bonzos, but he wrote and produced two notable solo albums and has been involved in countless musical projects up to the present day.

Again wikipedia comes to the rescue of the lazy (such as I):

Spear is best known as a former member of the Bonzo Dog Doo-Dah band. He wrote some of their wittiest songs such as ‘Shirt’, ‘Tubas in the Moonlight’ and ‘Trouser Press’.He is also well known for his robot creations,that graced the stage with the Bonzos, creating much hilarity and havoc. He is also famed for his virtuosity on the theremin leg – in ‘Noises for the Leg’, amongst other tunes. Many of his songs have clothing/wardrobe related themes, such as ‘Trouser Freak’, ‘Trouble with my Trousers’ and ‘Waiting for the ‘Wardrobe’, as well as the aforementioned ‘Shirt’ and ‘Trouser Press’. It is not known why. Roger was once quoted as saying, “Trousers. Trousers. It’s such a stumbling word. In America they have pants and jeans, but in England we still have trousers”.

I have recently digitized my vinyl copy of Spear’s 1972 Electric Shocks album in its entirety. Here is a track called “Patrick Moore,” which seems fairly standard until near the end, when aliens make a sudden appearance, which makes me happy.

I have a new server which I use to support my Radio Misterioso live show and podcast. All of the audio that disappeared on this site when my old server was attacked and destroyed about 6 months ago is now repaired. Thank you for your comments and your patience. Here we go again…

Music For Maniacs, a great blog and a true inspiration to me, features weekly posts on “extremes in music and utterly unique sounds.” Mr, Fab has been on my webcast, Radio Misterioso twice, and on Sunday October 25th, he returned with yet another treasure trove of weird and strange music.

Notable tracks played included a reggae song about Apollo 11, four or five old UFO drop-in songs (think “The Flying Saucer” by Buchanan and Goodman), sounds from the BBC Radiophonic Workshop, elephants playing xyolphones and theremins, a mashup of the Muppets and the Stray Cats, Sad Kermit, and music from L. Ron Hubbard.

This is damned funny, and I don’t even like Michael Jackson. 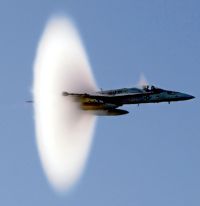 This is probably not “music,” but it sure is to me! I wanted to go into the Air Force as a pilot when I was a teenager, so I asked my dad (a USAF Korean war veteran) to look into it. He said that I needed 20/20 vision to qualify, so that was the end of that. I probably couldn’t have put up with all the saluting and everything anyway. I content myself with paragliding with and without a propeller.

We attended the Miramar Air Show this past weekend and I brought along my digital recorder. You will hear the Blue Angels in their F-18 Hornets screaming by, as well as a longish segment of the vertical take-off of a Harrier AV-8B “Jump Jet,” followed by its transition into level flight and away into the distance.

I usually disconnect myself from any political implications of these examples of military hardware and just enjoy the aesthetic experience. There were also biplanes, sailplanes, and even a powered hang glider in the show, as well as a MIG fighter which is sponsored by the Red Bull company.

There is a bit of distortion, but that’s what it sounds like when you’re up close to some of the most powerful engines in the world. Crowd noise and the show announcers and music are also heard.

Also included is a track from a CD called SuperSonics which is a collection of recordings of military aircraft. Listen to the sound of an SR-71 Blackbird spy plane engine start. The engines cannot be started unless they are already spinning at at least 10,000 RPM, so the Air Force uses a V8 engine from a Cadillac for the job. You can hear the V8 start and rev up as the jet engine kicks in.

When I first bought the CD, I forgot it was playing in the car and almost panicked when the sound of a jet fighter closing in came though the speakers.

Harrier Jet take off and transition into level flight

SR-71 Engine start (from the CD SuperSonics on Aircraft Records)

Here’s something you’ve probably seen but forgotten. It’s the “Whammy Duel” from the incredible 1953 film The 5000 Fingers of Dr. T, written by Theodore Seuss Geisel (AKA Dr. Seuss.) The only working filmmakers that come close to this sort of inspired and choreographed silliness are Tim Burton and Henry Selick, who probably owe this film big time, and know it.

Most of the audience are reported to have walked out 15 minutes into the premiere. Dumbasses. Seuss apparently hated the end product although I can’t figure why. Maybe it wasn’t weird enough even for him.

Dig the crazy theremin! Hans Conried (as Dr. T) is one of those people you remember for their performances, even if you don’t recall the name, sort of  like Paul Frees or June Foray.

I think the DVD is in print and of course there are other clips from the film at youtube and elsewhere. I sure hope someone doesn’t get it in their head to do a remake of this film and ruin it.

Three Versions of a Song About A Ghost

The best holiday of the year has to be Halloween. It’s devoted to the strange, scary and macabre, so how could it not be exciting? Much of my favorite music riffs on themes of the paranormal and things that aren’t quite right.

Ghost songs are legion. One of the best has got to be Mr. Ghost Goes To Town, which has been recorded by many groups thoughout the decades. There’s even a Hammond Organ version up on youtube. The peppy tune was written in 1936 by the famous songwriters Will Hudson, Irving Mills and Mitchell Parish.

The most creative cover here has to be the entry from Zeke Manners and His Swing Billies. Manners went to Fairfax High School which is right near my house! More on Zeke here.

Which one is your favorite?

An Old Favorite From Dr. Demento

As if you couldn’t already tell, I was a big fan of the Dr. Demento (AKA Barry Hansen) show that was broadcast out of Los Angeles and syndicated elsewhere in the 1970s and ’80s.

One of the artists the good Doctor “discovered” (along with Weird Al obviously) was someone known only as “Damaskas” to his fans (real name Tim P. Ryan.)

In 1977, his song “Making Love In A Subaru” was apparently requested quite a lot, as I remember it well. It’s decently funny, and the heavy influence of Tom Lehrer is readily apparent.

The other side of the single features a collaboration with Barnes and Barnes (of “(Roly Poly) Fish Heads” fame) dueting on a sort of mash-up of the Beatles with the Green Acres theme song. Similar to the “Stairway to Gilligan’s Island” thing from Little Roger and the Goosebumps, which it predates by about a year. No trace of this single anywhere online (not an mp3 anyway) so here you go. The record was probably the only one released on Asinine Records.

Making Love In A Subaru

A Day In The Life Of Green Acres

James Archer (via Ralph Carney again) comes through with another gem:

Filed under Huh? What?, J-Pop, Video

James Archer (from his friend Ralph Carney) hipped me to this on Facebook. Don’t read the description until you watch the video! Elements of Bonzo Dog Doo-Dah Band here as well, although I’m sure these Czech guys never heard of them.

Jožin z bažin (originally 1978) is a song by Czech musician and comedian Ivan Mládek, and is one of his best known songs. He even called it the “National Anthem” of his Countryshows. In January 2008, the song became popular in Poland and Hungary, winning several radio hitlists. It is also popular in Austria and Russia, sporting a cult following in blogs and several versions of translations. The song is a surreal tale of a mysterious man-eating (especially those coming from Prague) monster (Jožin z bažin, Joe from the swamps) living in the swamps. He could be defeated only with the use of a cropduster. A Polish cabaret called Kabaret pod Wyrwigroszem (‘Cabaret under a torn out grosz’) created a parody of “Jožin z bažin,” entitled “Donald marzy” (‘Donald dreams’), about the Polish prime minister, Donald Tusk. The Ivan Mládek Banjo Band has created Polish version of “Jožin z bažin.”

My favorite comment from youtube: “When I was a kid I wondered what life was like on the other side of the Iron Curtain. Now I know.”

Music/ Not Music
Blog at WordPress.com.